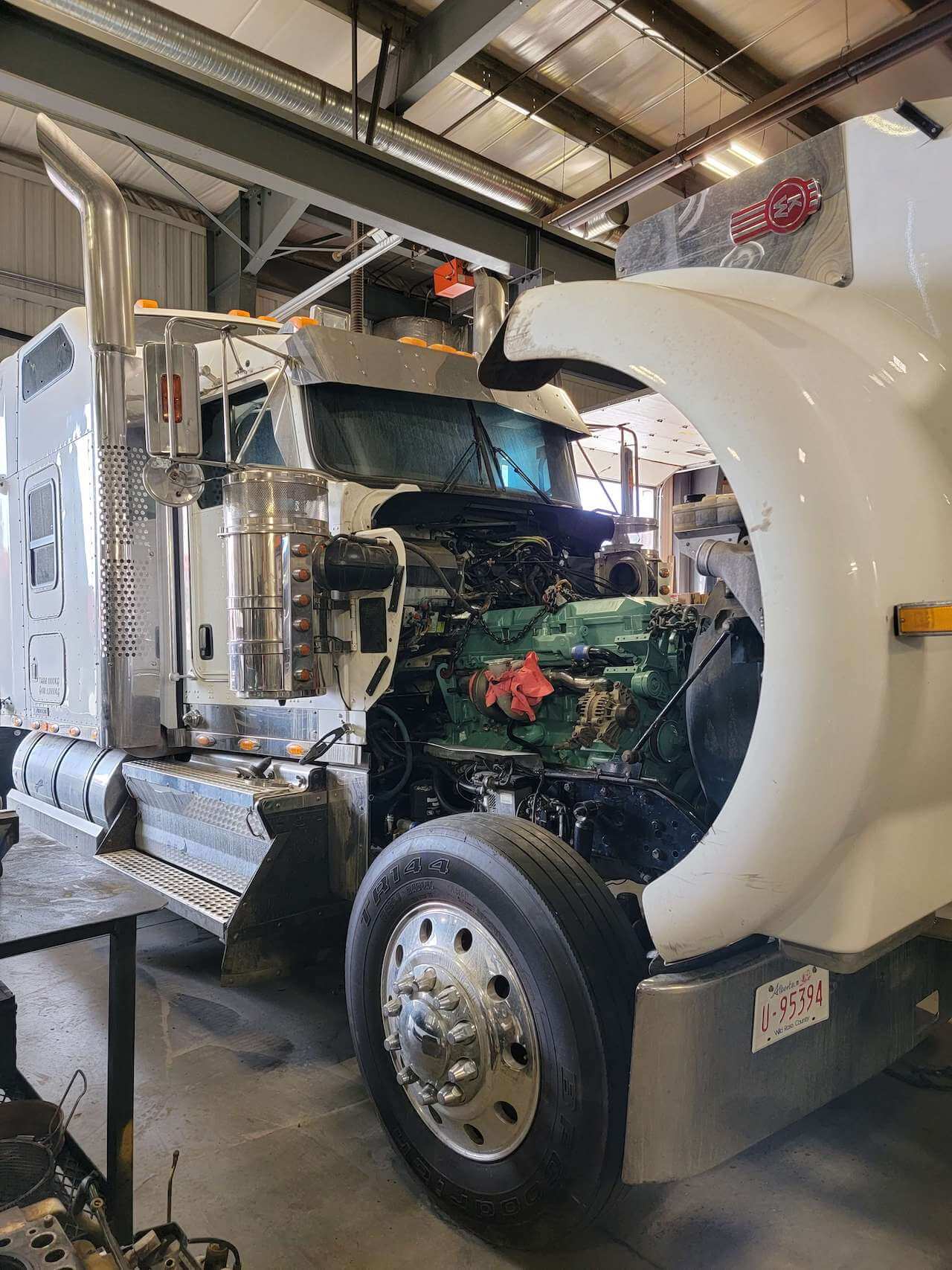 Summer is upon us and Adrenaline Diesel is already hard at work on our next project. As part of our summer project series, we recently completed a complicated engine swap, converting a 2009 Kenworth W9 series truck from the stock Cummins 871 engine that it came included to a newer Detroit 60 DDEC V engine. Below is a step-by-step account of the process including our reasons for migrating from a Cummins product to a Detroit series engine and the advantages therein.

The Scope of the Project

An engine swap is no easy feat. It requires both time and precision to carry out successfully, especially where heavy working vehicles are concerned. And while the process is inevitably time-consuming, in the hands of a well-qualified mechanic, an engine swap of this size is more methodical than it is difficult.

Our task was simple: remove the Detroit 60 series engine from the old Freightliner where it was originally installed, clean it up and rebuild it, then put it into the Kenworth truck after removing the existing Cummins 871 engine.

The engine in question, the Detroit 60 DDEC V, was well-worn, having exceeded its regular service life, but after a quick evaluation from our garage team, we felt that with a little TLC there was plenty of life left in the old Detroit. After all, Detroit series products are some of the best made diesel engines in the world.

The engine itself was originally housed in an old Freightliner chassis, and it seemed to be the truck's original power plant. Unfortunately for the Freightliner, it had seen better days and was destined for the scrapyard. The engine was one of the few salvageable parts still intact. The team at Adrenaline Diesel quickly removed the engine, mounting hardware, and all the ancillary wiring components before the wreckers took the truck and gave it a proper send off.

Why Perform the Upgrade?

You may ask yourself, "Why swap a perfectly good Cummins 871 with a worn in Detroit 60? What's the advantage?" Let's do a side-by-side comparison of the two engine models.

The Cummins ISX line was released around 1998 in order to keep up with changing EPA standards at the time. The 871 in particular saw widespread integration around 2002. It's a powerful 6-cylinder engine featuring:

The 871 model was seen as the pinnacle of the ISX run. At peak performance, this powerful inline 6 is capable of producing up to 650 horsepower under the right conditions. So why swap it?

The Cummins 871 also has its own shortcomings. In our previous article, we referenced issues such as EGR valve leaks, flattened camshafts, and dropped cylinder liners which can have a profound effect on the engine's efficiency and performance especially as it ages. Let's compare that to the Detroit 60's spec sheet for a clearer picture as to why we did the swap in the first place.

By comparison, the Detroit product is considered one of the best diesel engines on the market in terms of reliability. In fact, within the first ten years of its working life, the average Detroit engine experiences very little malfunction as long as adequate preventative care is administered. Here's a snapshot of the Detroit 60 series and its high points.

60 series production ranged from 1987 until 2011; the engine models came in three primary configurations:

Other key stats in the 60 series include:

With its reliability, single overhead camshaft, and open source design, the Detroit 60 DDEC V was built with longevity in mind and is easy to work with and modify, making it the clear choice for our first summer mod project.

The first step in the process was removing the Cummins 871 from our Kenworth W9. Engine removal itself can be a time-consuming, strenuous task. It requires a thorough knowledge of the vehicle that you are working with, as well as precision and patience. Unless you have direct professional experience working on tractor trailers, Adrenaline Diesel recommends partnering with a high-quality shop and using their expertise to help guide your project.

Removal was a matter of carrying out a few rudimentary steps before plunging in. Those steps include:

We had to exercise caution in prepping the chassis so as not to damage the Kenworth, and also to make installing the new engine easier.

Before installing the Detroit DDEC V into the Kenworth chassis, we still had some work to do. While the engine was in relatively good shape, it had still seen its fair share of use over the years, so our expert mechanics felt that a full engine rebuild was appropriate given the circumstances.

In this case, an engine rebuild meant:

As part of preparations/ rebuild process, we also upgraded to Full Tilt performance manifolds and performed a VGT delete to enhance the engine's efficiency and longevity.

First of the Summer Project Series

In the end, swapping out the Cummins engine for the Detroit 60 series model was time-consuming but well worth it. We substituted a powerful but unreliable engine for a timeless workhorse. This particular project was the first in a long series of modifications that Adrenaline Diesel has planned for 2021. Check back with us often to read about our latest adventures, and make sure to contact us regarding all your diesel and ECM needs.